skip to main | skip to sidebar

Gonna rip it up!

Hammers, crowbars, Reciprocating saws, OH MY!
Y'know, when you watch one of those home shows and see a goofed up remodeler or high-heeled flipper swinging a sledgehammer on a "never-been-updated" kitchen, it always looks like they are having the time of their life. Wild eyed. Shards of sheetrock flying everywhere. Giggles and grunts. They make tearing out an old kitchen look like it's more fun than a pocket full of squirrels.
Well I don't mean to shatter any illusions here but... it's work! About 100-million screws, and 1/3 of which stripped out the second I touched them. Screwed into the floorboards, screwed into each other, screwed (and glued) onto a ledgerboard that was also screwed into the studs. I had to use everything from Vise-Grips to a reciprocating saw to do it, but the cabinets are now all outside under a tarp.

I suppose it would have been easier and more satisfying to just start swinging the sledgehammer, but although we don't care for the design of the cabinets, they are well made and are in decent shape, too. I'm sure someone else will want them, so we're donating them and the appliances to the Rebuilding Center in Portland. 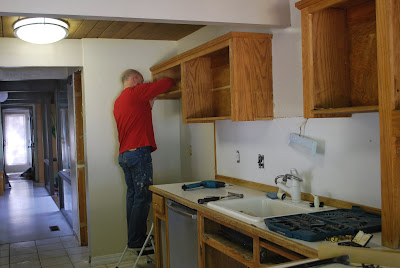 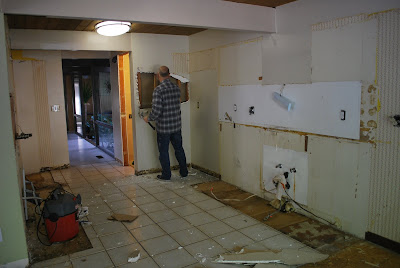 The ghosts of wallpapers past!

A little urban archeology for your amusement. 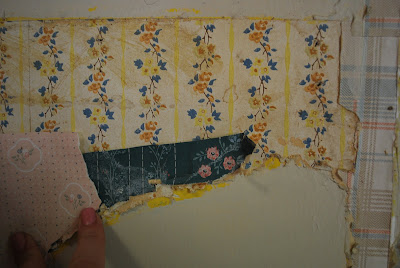 Grossest thing ever!
Mice! When we moved one of the base cabinets, we discovered a mouse-mini-metropolis made of insulation and mouse poop. Learn from this, dear reader... seal up every possible entry to your house no matter how small, or these little varmits WILL find a way in. And while they are kinda cute, they smell BAD and can spread disease. You DO NOT want them in your house!!! Haley somehow managed to supress her gagging long enough to hold open a trash bag while I used two other bags as gloves and scooped away the mouse unrine soaked insulation, and about 5-10 dead mice. (YUCK! I guess they had been poisoned or something.) Then I used the Shop-Vac to clean up all the smaller bits. Yuck Yuck Yuck! 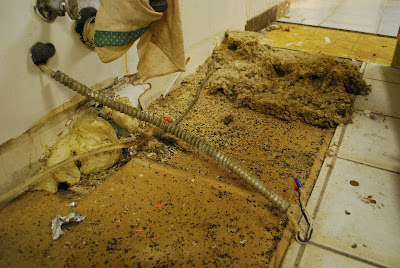 Sheetrock removal
This was actually kinda fun... dusty, but fun. After making a few initial holes and making sure the power and phone outlets were clear, we started pounding, prying and pulling away the sheetrock. All four of us got into the act and a sort of contest developed to see who could pull away the biggest piece. There is now Mount Sheetrock in the middle of the floor just waiting for the dumpster to be delivered today (it'll be a regular family style sheetrock bucket brigade tonight!). 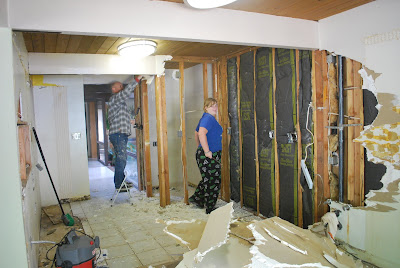 The sheetrock was hiding some interesting things.
-It became clear where the new kitchen beam needs to be placed in order for it to line up with the existing beam in the dining room.
-There wasn't any insulation in the water vent portion of one wall (used to build Mouse-Metropolis, no doubt).
-When a previous owner had opened up a pass through from the kitchen to the dining room, they did a very poor job in shoring up the studs they cut. Two of them were literally unattached and wobbly. Good thing it's not a load bearing wall!
-There is now an amazing view of the back yard now from the kitchen. We are very pleased with our decision to open things up a bit.
...stay tuned.....
Posted by Steve at 8:59 AM

It looks like they changed the wallpaper four times from 1985 to 1992, that is impressive. At least there wasnt any lattice behind the sheetrock.

I love all the different wallpapers! Glad you had fun tearing out the sheetrock. Sound like good family fun!!!

Who are these people?

Haley - Is an amazing graphic designer and businesswoman, is developing an obsession with travel, puts up with noisy band practices, and also digs MCM style.

Steve was born in SoCal, raised in NorCal and has lived in the Great Pacific Northwest for many many years.
Haley was born and raised nearby in NE Portland.

Together they're attempting the seemingly impossible; to bring this great house back to its MCM Grandeur and raise two nutty kids (who are now adults!) ...and not drive each other crazy in the process!
Life is kooky, but always a fun adventure! 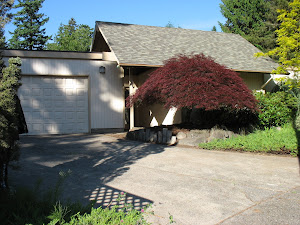 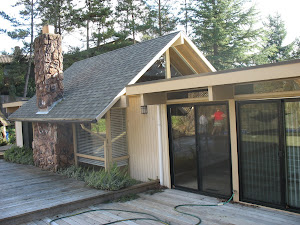 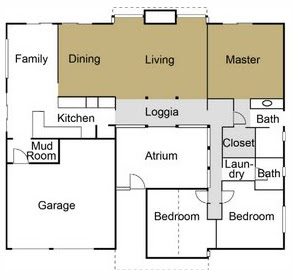 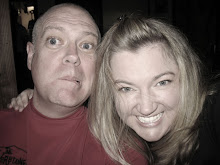 We just may be crazy!

Plan B... the trailer 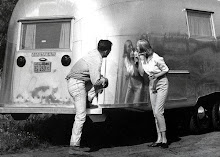 Just in case the whole home restoration thing doesn't work out! We have a '56 Airstream Safari that we're restoring in our spare time. :-)